Stress and the toll it takes on you

There's a saying from Psalms, "to go from strength to strength".

I, however, live my life going from stress to stress. I don't know why. But it's how I am. And lately, it's been a shitstorm of stress.

My summer plans to go to the US with the boys have been cancelled because 6 weeks after starting a new job (after being out of work for almost 3 months), my husband's company laid him off so they could have the out-of-work brother of one of the company founders basically work illegally. That was over 2 months ago.

We're moving to a smaller apartment on Sunday, the reasons for that being the apartment we're in is really too big for us (when we first moved in, my adult daughter was living with us, she's no longer doing that), the owners refuse to replace the air conditioning so it actually works (having spent 2 summers in Beersheva heat, I can't do that any more). There are a few financial reasons for moving, but frankly, the no air conditioning in 105 F degree weather is a HUGE motivator. Especially when you work from home as I do. And no, we can't simply buy new ones ourselves; it's central air conditioning and the way it was set up is just not good.

So we're moving. And hubby has been out of work for over 2 months. And the vacation that was keeping me sane was cancelled.

So I've been a bit stressed.

The thing about stress is, you don't often realize just how much you've been drowning in stress until the/a stressor has been relieved.

My husband has had several interviews with different companies, literally all over the world. And it looks like a local company is offering him a job. When he called me to let me know, I couldn't make it through the phone call without tears. I barely hung up with him before the ugly crying started. Sobbing, tears streaming down my face.No snot, because as usual my sinuses are stuffed. But I'm sure that would have been dripping too.

Okay, deep breath, find a tissue, and get back to packing.

So, do you go from stress to stress, or are you water off a duck's back kinda personality? 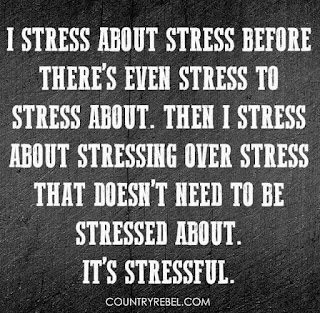