Finally took out the fabric, tape measure, and checked the pattern sites for making the new mei tai.

No, it's not some tropical cocktail, that's a MAI tai. A mei tai is a soft structure baby carrier.

When my oldest daughter was born, I had a fairly basic Snugli carrier. It was convenient, but in hindsight, probably not the most ergonomic for her.

Many years later, when my oldest son was born, I made a baby wrap. 6 meters of a t-shirt material with a non-stretch meter long pocket sewn on, more to mark the midpoint of this long wrap, than for function as a pocket. The construction of the thing was much easier than trying to wrap yourself and baby into it, although after a few tries, I was a pro at it. With a shift to the side, I could easily (and modestly) nurse in public.

After 6 months or so, my son became too heavy for the wrap. It was so stretchy, I found myself constantly having to adjust, tighten, and retie. So I looked into making something that required a bit more than finding the middle and sewing three straight lines.

And that's when I found the mei tai. The basic construction is a rectangle with four straps coming out of the corners. The bottom two, the waist straps, are sewn in straight, as they are simply going around your waist. The two upper straps, the shoulder straps, are sewn in at an angle, because they're supposed to go over your shoulders, cross at the back, then come around to your front, where you either tie it, or cross it again and tie it at the back if the straps are long enough and/or your skinny enough.

So I found a pattern, bought white cotton duck (heavy cotton canvas material), and nicer material with a pattern. I also bought some polar fleece to use for padding the shoulder straps.

I really went overboard in making it strong and safe. I double, and possibly triple stitched where I sewed the straps to the body of the carrier. I'm fairly certain I used a double layer of cotton duck (where the straps were sewn to), and then lined the inside with the nicer pattern material, and definitely the outside. 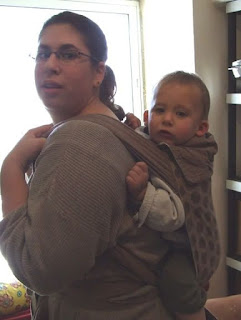 My oldest daughter "wearing" my oldest son. I believe he was about a year old.

Well, whatever I did, I did it right - except using polar fleece for padding. That did NOT work well. Both my boys used the mei tai, and two out of three grandsons have used it. With my middle grandson being 4 1/2, I think he still is carried in it every now and again.

So it's an 11 year old well made mei tai. And at my daughter's request, I'll be making a new one. Same patter as above, and I'll be making it overboard in strength and safety. And this time, I have padded shoulder straps from a backpack to use for padding the shoulder straps of the mei tai. (I went to a Goodwill-type store near me and found a backpack that had just the type of straps I wanted for just the right price (cheap).

So I've taken some measurements, cut the straps off the backpack (and labeled left and right (yes, it matters)), and I'll be all ready to get measuring, cutting, and sewing tomorrow evening.