Reporting suspicious or abandoned packages or bags is nothing new in Israel. And it didn't come about since 9/11. We've been doing this for YEARS (although I suppose post-9/11 is years now too...). And with many things, Israelis have this weird relationship with the see something, say something philosophy.

On the one hand, it has saved countless lives. Bombs in backpacks are a very real thing in this country. On the other hand, would a random daycare center in most any city in Israel be a target of terrorists?

I have reported several suspicious bags in my 20+ years of living in Israel. What's involved is calling the police, reporting your location, explaining what you're seeing, any relevant details about location (such as you're at a bus stop, near a day care or school, etc.), and answering any questions the dispatcher may have (among the questions I was asked was if the backpack was open, could I see any wires, did it look empty).

You also might be asked to stay until the police (and bomb squad) arrive, to make sure people don't walk near it, touch it, or knock it around.

So I did. I also stayed because the backpack wasn't visible from the street - there was a truck blocking it from the street - and since it was a girl's backpack, there was also a possibility that someone would come along to claim it - as it happened the last time I reported an abandoned bag.

Unfortunately it took the police and bomb squad 30 minutes to arrive, all the while parents were pulling up to the day care centers to collect their kids, and despite living literally across the street from a fairly large police station. I honestly have to say, the wait really made me feel like a "fryer", the Hebrew term used to describe a sucker or a rube.

But they finally did arrive, they cleared the area, made everyone evacuate to a safe distance, did some X-ray stuff, chased back people who didn't realize what was going on, and eventually did a controlled explosion.

I hung around until that part, and then went upstairs to my apartment. Twenty minutes with the police on scene was long enough for me, I didn't feel like hanging around further to watch the cleanup. Probably papers scattered everywhere. Pieces of crayon and white board markers... 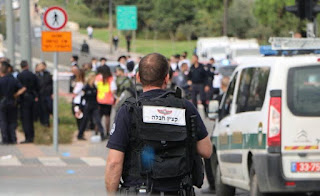 Stock photo of a member of the Israeli police bomb squad

So, have you ever seen something, and then said something?
Posted by Devo Kessin at 5:48 PM