At the end of the month will be the Jewish holiday of Purim. To learn what the holiday is about, feel free to read about it here.

For the past 6 years or so, our tradition with regard to giving mishloach manot was to give mostly to people we don't know, and especially to people who might not get any from others (usually because they're secular and don't necessarily observe this part of the holiday). When we lived in Ariel, I had the feeling that when we gave to people, it was truly appreciated. Just the reaction we got when the door opened to our knock, the residents seeing us in our costumes, their momentary confusion turning to happiness when presented with the package of food; it really seemed genuine.

Last year was our first Purim in Be'er Sheva, and our first year living in an apartment building. I knew the demographics of the building was mostly secular, with a decent number of religious Jews, and even a few Muslim families.

Now, usually the amount of mishloach manot we give out is simply dependent on "we make as many packages as we can until we run out of something, and then we stop". One year it might mean "I've made 3 dozen small cakes/challot" or "I bought a sleeve of 25 medium containers, now there's no more vegetable soup, so we stop".

Last year's mishloach manot were oversized cups of popcorn, an assortment of cookies I baked, and a drink pouch. I had baked three different types of cookies, giving me about nine dozen cookies of each type, and I had bought two boxes of drinks, giving me 36 drinks. So it was either going to be "until I ran out of popcorn, or 36 packages were made".

Our first stops of course were the people on our own floor. There are six apartments on each floor. Once those were delivered, we packed up the shopping cart, got into the elevator, and went floor by floor, ringing doorbells and knocking on doors. Many people weren't home. And of those who were home... most looked at us like we were crazy. At some point, I really started getting tired of the "WTF?" looks I was getting when the door would open. And the truth is, some of the religious tenants kind of gave us looks of "why are you giving to us?"

So I'm really discouraged about this coming Purim. To help with it, I've come up with a new plan. I'm making eight mishloach manot. That's it. It will be containers of three different types of salads, and a medium-sized home made garlic pull apart bread. And we'll actually make a list of who we want to give it to, who will make me feel like my effort is appreciated. 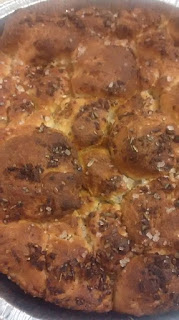 I mean, I try really hard to teach my kids that mishloach manot is about the giving, and not the receiving, that it's important to think about people who might otherwise be forgotten, and that it's not about seeking effusive praise and gratitude. But quite frankly, it shouldn't also leave one feeling completely unappreciated.
Posted by Devo Kessin at 8:44 AM