I've always wanted a tattoo. When I was about 30, I got my first one. I'm much older now, and I've been wanting a second and third and fourth since that day.

It's not really done in my society, for several reasons. The first (and big one), is the Biblical prohibition. Leviticus 19:28 - "You shall not make gashes in your flesh for the dead, or incise any marks on yourselves: I am the LORD."

The second reason is the forced tattooing many of our ancestors were put through during the Holocaust, when they were reduced to numbers in concentration camps. Tattoos just leaves a bad taste in many people's mouths because of this.

The third is because people seem to believe that if one has a tattoo, one cannot be buried in a Jewish cemetery.

The third reason is actually just Jewish urban myth. It's highly likely someone was told this when s/he asked about getting a tattoo, and whomever s/he asked tried to think of the ultimate deterrent.

And as to the second reason, I certainly can understand and respect it. I just feel that by getting a tattoo, by MY CHOICE, I reclaim something. Just like the LGBT movement reclaimed the pink triangle as a symbol of strength, when it was used in Nazi Europe to identify, mark, and disgrace gays and lesbians.

My younger daughter has been wanting a tattoo since she was about 15 or so. I told her she needed to wait until she reached her majority, and that she had to find something meaningful to her. Once she found the graphic, she would then have to spend a year looking it over, considering it, etc. and then if she still felt strongly about it, she could pay for her own tattoo.

Ten years later, and yesterday, she got her first tattoo. It's on her upper thigh. When I asked her why she got it there, she said because she wants to be able to see it, but she also doesn't want it to be visible to others. Then she said that for her next tattoo, she wants an inspirational quote.

I laughed, and she asked why. I said to her that her first tattoo isn't even 24 hours old, and she's already planning her next tattoo... she's hooked!

Here is a collage of photos I took back in 2014 of different Jewish people with tattoos. The top and bottom are the same person. The right-hand photo is a friend. The left-hand side is me. 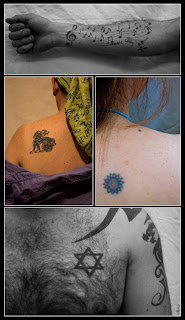