Sarcasm, Just Another Service We Provide

My husband likes to tell a story of how when he was a kid, and the family would go on trips, his mom would line the dashboard with twenty single dollar bills. If she had to tell my husband and/or his sister to behave, she'd remove a dollar. My husband and his sister would then split whatever was left when they got to their destination.

This afternoon, we took the boys to the beach in Ashkelon. The drive is a bit under an hour, depending on the driving conditions. We spent a bit over an hour at the beach, and it was wonderful. The water was as warm as a bath, but the waves made things feel more like a washing machine.

On the drive home, the boys were bothering each other more than usual. After telling them to leave each other alone for about the tenth time, and this only being 15 minutes into our drive home, I told them we were going to have a contest.

Not a quiet contest, those things never work. I told them to each look out their window, and call out whenever they saw a pink flamingo. A brief discussion followed to iron out the rules - such as would plastic flamingos count, or did it have to be the real thing. And Elchanan wanted to clarify it was only pink flamingos, and not any pink item.

Unfortunately it only lasted for ten minutes, but it was a gloriously silent ten minutes. And of course during that time, I knew Zach and I couldn't look at one another, because we'd burst out laughing.

And just to be clear, other than in a zoo, there are no pink flamingos in Israel. 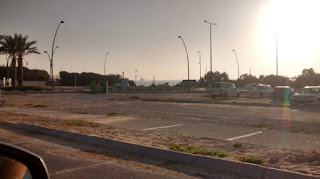 Ship off the coast of Ashkelon.

So, what kind of snipe hunt have you subjected your children to, in order to keep the peace and quiet of a drive home?
Posted by Devo Kessin at 9:40 PM